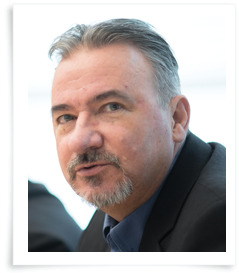 Todd Latham, president of Actual Media Inc., is proud to announce that Nick Reid has joined the firm as a shareholder and managing partner.

Nick will take a leadership role with Actual Media’s water-related publications and events, specifically Water Canada, the Water’s Next Awards, and the Canadian Water Summit. His depth of management experience and industry engagement will also assist Actual Media to further develop its creative agency business and strong role in the infrastructure space with ReNew Canada magazine and the Top100 Projects publications and events.

“Nick will help us grow the water segments of the business, while also elevating the Actual Media brand across his broad network of influence,” Latham said.

One of Nick’s strengths is his collaborative work with a diverse network of stakeholders in organizations, municipalities, ministries, and industry, seeking opportunities to execute long‐term strategic initiatives fundamental to the growth of Ontario’s water sector. In his past role with the Ontario Clean Water Agency (OCWA), he participated in several stakeholder consultations as the province developed the Water Opportunities Act and its Water Sector Strategy.

Nick has an Honours B.Sc., Environmental Science, Biology from Trent University and has enjoyed a long career in the water sector. From 2002 to 2006, he served as the general manager of the Region of Peel’s four main water and wastewater plants, ensuring continuous service to 1.2 million residents under OCWA’s largest operating contract.

Previous work at OCWA encompassed management of OCWA’s IT Division, including support for Ontario’s largest implementation of a Wide Area SCADA system for more than 700 water and wastewater locations. Nick’s experience as publications chair of the Ontario Water Works Association’s (OWWA) quarterly Ontario Pipeline magazine from June 2009 to January 2015 prepares him for the hands-on work he will be doing with Water Canada.

In May 2014, he took on the chair role of AWWA’s Manufacturers and Associates Council Subcommittee on the Low Economic Value of Water, and he presented findings at ACE in Boston. In addition to his new role with Actual Media, he was recently appointed as the executive director of Ryerson Urban Water at Ryerson University. He continues to serve as a director with OWWA and on the advisory committee of the Canadian Water Summit.