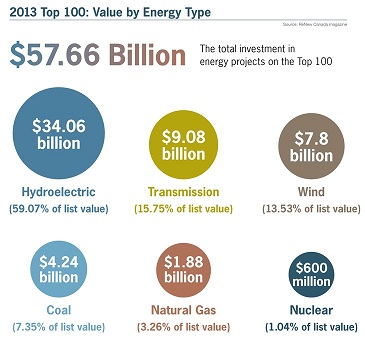 With 15 hydroelectric projects (valued at $34 billion) now underway across Canada, over 12,600 megawatts of new power is expected to come online in the next few years. And that’s only a quarter of the total value of the 2013 Top 100: Canada’s Biggest Infrastructure Projects.

“Last year’s number one project was a transit project—Toronto’s notorious Eglinton Crosstown LRT, down at five this year due to a reversion to the original design scheme. This year, energy is back on top,” says ReNew Canada’s editor, Mira Shenker. “Of course, by ‘top,’ we mean most expensive. Projects are ranked by dollar value,” she added.

The total value of the Top100 list is $146 billion—up from last year, an indicator of growth in Canada’s engineering and construction industry

There are 27 public-private partnerships on the list, a total value of $25.52 billion

The total value of the nine new transportation (highways, roads) projects on the list is $26.13 billion (compared to the $9.3 billion invested in new transit projects)

Visit the Top 100 site to sort the list by categories such as cost, location, funding source, and key player.

Download or view stats related to funding and financing models, sector breakdowns, and other analysis of the Top100 projects at flickr.com/photos/top100projects

For a full copy of the report, contact Mira Shenker